Apart from the traditional rule guiding this fact, because a classical guitar has nylon strings, most people prefer to play it with their fingers. However, it is perfectly okay to use a pick.

If you are wondering why people bother much about using or not using a pick with a classical guitar, it’s because of several reasons.

If you’ve read most articles about why guitar strings break, you will find that the type of pick used could be responsible. The pick you use especially if it is not one of the recommended ones for a classical guitar can scratch the surface of the guitar. If the scratches multiply, it could lead to cracks.

If the pick is heavier than the spring gauge, it can put too much tension on the string causing them to loosen. And in extreme cases, it could break the strings.

Can A Beginner Use a Play A Classical Guitar With A Pick?

Unlike other guitars, a classical guitar does not come with a pickguard. A pickguard is a flat material placed underneath the strings to prevent the pick from scratching the surface of the guitar. And as a beginner just learning to play a classical guitar, it is most likely that you are not used to playing nylon strings with a pick. At least for the first few times, it might be hard trying to adjust to the soft strings. And during those first few times of trying to adjust you might damage the surface of the guitar.

You rarely need to use a pick when playing classical music because you almost always need to utilize your fingers and thumb. However, using a pick is allowed when playing mainstream tunes or only chords and lead lines. Some players employ a hybrid technique by using a pick and their fingers simultaneously.

A beginner should be allowed to choose whatever method of playing according to their interest, what they find more enjoyable and comfortable. Because no matter how much you force them to do one thing over the other, if they are not happy with the choice, they won’t produce good music.

As far as they are ready to go through the challenges of learning whatever method they choose.

What Kind of Pick Can I Use for A Classical Guitar?

Although celluloid is the most popular material for guitar picks, nylon strings are not the best fit for them. The tougher substance will probably cause clicking sounds when played. 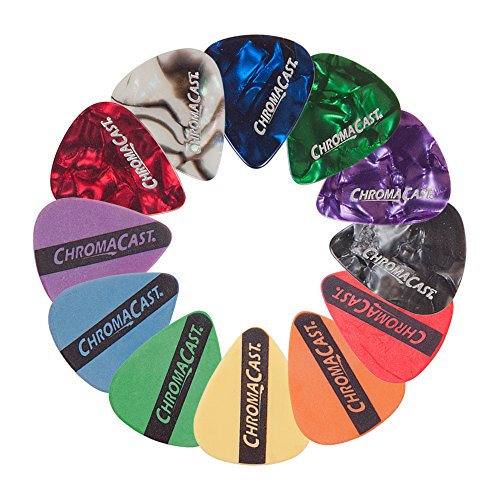 With nylon strings, nylon is frequently found to perform well because it provides a balance of clarity without being overly harsh. The pick’s thickness, however, has the greatest impact on sound

Just like the strings, the picks need to be thick enough to move the string. The thickness a pick is made of is called gauge and they are measured in millimeters. The thickness of the pick determines how loud or warm the guitar sounds. The gauges range from

The best and recommended pick size for the classical guitar is the medium gauge. Anything thicker than that will produce a too warm and lower sound. The medium gauge pick is most recommended because of its close resemblance to the thickness and sound made when playing it with fingers.

Do I Need Long Nails to Play The Classical Guitar?

This is one question asked a lot by students and beginners. Well, the answer is no, you do not have to grow long nails to play a classical guitar. A classical guitar has nylon strings. Nylon strings are the most flexible and softest type of strings to play. You can use your fingers, the flesh, or the pads of your fingers to play the guitar without hurting them.

But if you are scared that it might hurt your flesh, you have nothing to worry about. There are recommended picks you can use to play the guitar. Fingernails do not play a big role in playing the classical guitar. You can play beautifully without having long fingernails.

While playing the classical guitar with your fingers is the most traditional thing to do, it is still okay to use a pick. You might not be used to using your fingers to play the guitar. The only thing is that you might limit yourself from getting the sweet melodies and harmonies the classical guitar produces when played without picks. And if you keep playing with picks, you might never get to share that hidden harmony with your audience.

link to Why Do Classical Guitarists Hold Guitar Differently?

Continue Reading
link to How Long Do Tubes Last in Guitar Amps?

If you are a new guitarist, one of the questions you might ask is “how long do tubes last in guitar amps?”. Even for an old guitarist, knowing the answer to this question can help you ensure that...