A guitar and a ukulele are both string instruments, although they differ greatly in some ways. For instance, even the smallest guitar models are bigger than ukuleles. This is because a guitar has six strings, but a ukulele only has four.

You might be thinking, Can you play guitar songs on a ukulele?

Absolutely! On the ukulele, you can play almost every song on a guitar. Of course, given the disparity in the number of strings used, fingerstyle tunes would be considerably more difficult to perform. Nonetheless, you have to learn to fret the chords, and you’re good!

Yes, it is the solution. But before you could do that, you had to learn many other things. Fortunately, we are here to help you.

You must better comprehend the areas where the guitar and ukulele overlap to switch between performing songs on the guitar and the ukulele with ease. Here are the key analogies and dissimilarities between a guitar and a ukulele.

E-A-D-G-B-E is the usual tuning for a guitar’s strings, with the top string being the same note as the bottom string but an octave higher. The six-string guitar requires this tuning configuration to be played more easily and generate higher-quality tones.

On the other hand, a ukulele is a four-string instrument with a conventional tuning of G-C-E-A. It would be best if you remembered the normal tuning of each instrument since you will need to know the notes that make up various chords when you begin learning how to play them.

Both guitars have identical-looking fretboards, often known as fingerboards. So it wouldn’t be that tough for you to perform songs on the ukulele if you’ve been playing them on your guitar for a while. That is because they both adhere to the same idea or tenet. The sole distinction is that a ukulele’s fretboard is considerably more compact and smaller than a guitar’s.

The challenge with playing guitar tunes on a ukulele is this. The chord forms are rather different. That is a result of how the strings are arranged and how their notes differ.

For instance, a C chord on a guitar necessitates fretting the A, D, and B strings on the third, second, and first frets, respectively.

However, it would be best if you fretted the A string on the third fret to play a C chord on a ukulele. This is because the chord or sound you get when fretting the identical chord shape on the guitar is completely different. Therefore, when trying to perform guitar songs on the ukulele, it’s crucial to become familiar with each instrument’s chord forms. 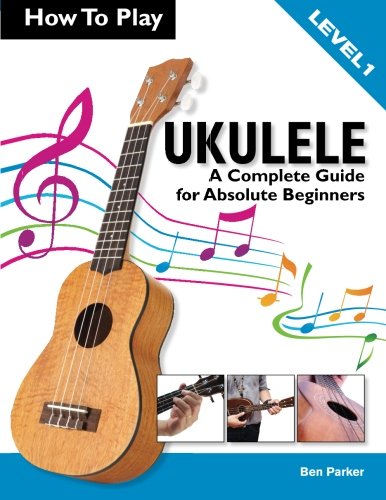 How To Play Ukulele: A Complete Guide for Absolute Beginners - Level 1

Additionally, there is a significant distinction between the sounds of a guitar and a ukulele. If you weren’t aware, “Ju-ke-lei-li,” which loosely translates to “jumping flea,” is where the ukulele gets its name. The sound of the instrument, which is quite vibrant and bright, is characterized by this.

While the guitar can also have a bright sound, it has a much fuller and lower range than the ukulele. As a result, you could discover that some songs don’t appear to complement the smaller instrument’s joyful and triumphant tone.

The strumming pattern is another feature that these instruments have in common. Despite the ukulele’s different string configuration, you can strum it similarly to a guitar. You may explore with fingerstyle playing on a ukulele if you prefer it. Ensure you’re fretting the appropriate notes and chords to make it sound nearly identical to a guitar.

How to Transpose Guitar Chords for Ukulele

Here is a helpful example of converting guitar chords to ukulele chords.

There are several one-finger chords on a ukulele, but this isn’t restricted to them. For example, the result of taking a complete barre chord from a guitar and removing the first two bass strings from the chord chart is as follows:

On a ukulele, this is still a major chord form. The same way you would on a guitar, you may change it to minor, seventh, sus4, or anything else.

Guitarists often consider the many barre chord forms as major, minor, 7ths, or other shapes and are placed at the fret they want.

The guitar and ukulele are excellent instruments to learn if you want to expand your musical repertoire. The best aspect is that, as long as you know how to fret the chords of both instruments, you can play practically any song on either.

link to Can You Play a Guitar With Short Fingers?

Are you a small-handed guitarist? If so, then congratulations! A lot of great musicians were small-handed. In fact, one famous guitarist, Eric Clapton, once said that he would rather play an...

Continue Reading
link to Can Acoustic Guitars Be Plugged Into Amps?

You've just bought a new acoustic guitar and are itching to start playing it. The question is, can you plug the guitar into an amplifier? Yes, acoustic guitars can be plugged into amps. Acoustic...